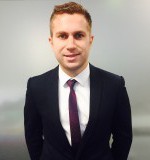 I was first hired by R B Legal whilst at university, and have since moved through the legal ranks and practiced at the firm as a law clerk, trainee solicitor and now as a qualified solicitor.

Throughout my tertiary education, I lived abroad and studied comparative international law abroad at both Bar Ilan University and Hebrew University in Israel.

Given broad range of matters that our firm deals with, I am often involved in different legal matters on a daily basis. Whilst being a young solicitor, such involvement gives me a depth of knowledge to provide clients with both commercially and legally sound advice.

Despite being admitted in October 2014, I also have experience in appearing in VCAT, the Magistrates’ Court, Supreme Court and Federal Circuit Court in a broad range of matters. I also have a specific interest in property law and general litigation, and try to get as many of those files allocated to me. Recently, I have been involved in numerous bankruptcies and corporate wind-up proceedings.

Outside of the office, my passion for sport is something that I have inherited from my dad; being an unfortunate staunch supporter of St. Kilda Football Club and Arsenal Football Club (in England). Currently I enjoy going to gym and playing soccer for Southport Football Club where I was the Club Secretary for a number of years.